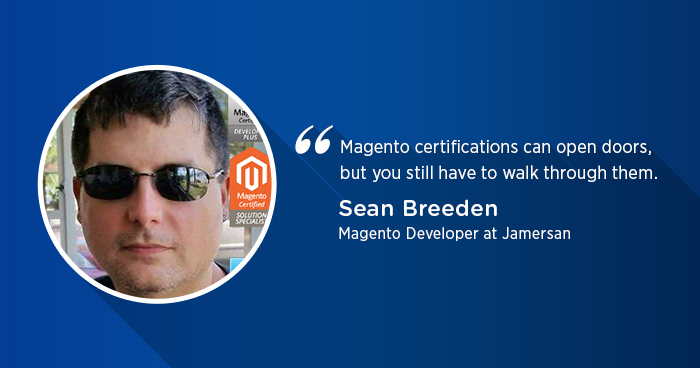 Sean Breeden has done several Magento certifications. He is working as a Magento Developer at Jamersan and has many years of experience working in different small to large organisations. Sean is also an active member of Magento StackExchange and Magento Community. So let’s read along and find out about his contributions to the Magento Community.

Cloudways: First of all, it’s a real honour to sit with you for this interview. With so many years of experience in Programming and Development field, what was your initial reason behind choosing Magento? Could you briefly shed light on your career, please?

Sean: Magento was recommended to me by a friend who was looking for a new e-commerce platform after having spent years developing in OSCommerce and Yahoo RTML. He brought it to my attention and wanted to know if I thought it would be worth pursuing. Magento was so new at the time that hardly anyone had heard of it. I gave it a chance and had never regretted it.

I’m 43 now, which means my early years of programming were spent with BASIC on a TI-99/4A and Commodore Vic-20. In my 20s, I worked primarily as a field tech and network administrator on Novell and Windows networks. I still stay as up-to-date as possible on computer security, which helps me write more secure applications and comes in handy for setting up servers. I was able to gain a lot of Unix experience as well by working on Unix servers and old VAX/VMS (OpenVMS) systems. I also worked with Visual Basic from versions 3 up to 6 along with classic ASP before it was classic, and co-authored several educational software titles in VB and Authorware. Eventually, I switched to Linux and PHP and had been doing that ever since.

I’ve been working for my current employer, Jamersan for about a year now and the team is a pleasure to work with.

Cloudways: What challenges did you face in your initial days and how did you handle them? If Magento wasn’t developed, what would have been your recommended platform for ecommerce business?

Sean: The main challenge was working on something with little documentation and a minuscule community supporting it. I dove in head first and started tinkering with the system. I had done a lot of core hacks before I learned how to extend Magento properly.

It’s difficult to speculate on which platform I would have recommended if Magento had never been developed. Before Magento was released, I think most developers had to know every ecommerce package out there.

Cloudways: How would you differentiate Magento 1 from Magento 2 with respect to backend development? Do you think that Magento 2 is the better choice for store owners?

Sean: For new clients, I can’t recommend going with a package that is facing immediate discontinued support next year like Magento 1. Anyone supporting a Magento 1 storefront should already be planning on making the transition before the sunset date.

So much effort has gone into the development of Magento 2 that I do recommend it for store owners. Magento 2 has a much larger community than Magento 1 in the beginning which means that many of the problems that are encountered will be identified and fixed quickly. Even if you’re not planning on making the switch now, if the plan is to go forward with Magento 2 then developers and merchants should be familiarising themselves with it as soon as possible.

Sean: Magento will continue to grow tremendously. It is continually being improved by some of the most brilliant developers from all over the world.

I think Magento 2 will completely dominate the ecommerce industry.

One person that embodies this is Marius Străjeru, who has no Magento certifications but is a 2x Magento Master! He is the proof that certifications shouldn’t be anyone’s sole basis for determining someone’s skill level or value.

Never pursue a certification for the sake of having it. It’s much more important to have the ability to apply the skills that the certification represents.

Cloudways: How and from where can Magento Community members prepare for these certifications? Please share some tips & tricks and useful resources for learning Magento.

Sean: The best advice I can give is to download the study outline from Magento’s certification page and start filling it in. If you can’t answer everything on it then participate in one of the study groups that are available. Demac Media has some great free study materials available.

Sometimes the best way to learn something is to just dive into it. Come up with a task or feature and try to complete it. Get on Magento StackExchange and the Magento Forums to answer questions. The more exposure that someone has to a platform like Magento the easier it will get.

Cloudways: What advice do you have for Magento beginners who want to learn about Magento? Where should newbies start from?

Sean: The Magento community has made a lot of resources available to everyone interested in all things Magento. I always recommend Alan Storm’s blog because it helped me a lot. Official documentation is available at https://magento.com/resources/technical, so I highly recommend reading everything even if you don’t understand it at first. Like all Magento developers, one day you’ll have that lightbulb “ah-ha” moment where it all clicks into place.

Cloudways: Sean, what do you enjoy the most in your job routine? Also, please share a picture of your workspace and work desk.

Sean: I work remotely and have a dedicated office in my home, so the favourite part of my job routine is the lack of commute. Sometimes there is a two-cat pile-up in the hallway though.

I use a System76 desktop which has been a real workhorse. It runs Ubuntu as the primary OS, so it’s perfect for Magento and other php development.

My work area is pretty simple. I used to have multiple monitors but went back to a single one with multiple virtual desktops a while back. Everyone on our team has rubber ducks to yell at, and the orange thing sitting on my system is an Amazon Tap which is perfect for music during the work day.

Most of my Magento and other miscellaneous stickers are on my laptop but that was covered up completely by the end of last year, so they’ve started spilling over onto my desktop. Eventually, my computer case and entire desk will be constructed entirely out of Magento stickers.

Cloudways: You are a man with a busy schedule. How do you spend your spare time? Do you like playing games, watching movies, and hanging out with friends and family?

Sean: My spare time is spent reading and learning. I like to lift weights and swim after work to help unwind. It’s important to break a sweat doing something physical every day, especially after 40.

Cloudways: Everyone has some influences in life. Name some people who have inspired you the most in your personal and professional life.

Sean: Ben Marks and Vinai Kopp are two of the most influential Magento people to me. I attended Magento U in 2011 which was taught by both of them. It was a fantastic week of deep learning that I would recommend to anyone. It’s worth every penny!

Everyone who gives back to the community inspires me to try to do the same. There’s too many to list entirely here, but off the top of my head: Marius Strajeru who has 130k on Magento StackExchange — amazing! Alan Storm whose highly detailed and educational blog posts have helped many Magento developers, Sherrie Rohde who actually understands the value and strength of the community, Rebecca Troth for her Magentube Youtube channel, and all of the Magento Masters, bloggers, Stack participators, forum members, Magento Meetup organisers, and repo contributors! Thank you all!

In my personal life, my main inspiration is my wife of 21 years, Mary. She’s the reason I try to be a little better than the day before.

Sean: I prefer dedicated hosting for Magento. I think Magento installations should avoid shared hosting because there’s just too many inherent problems with that for ecommerce sites.