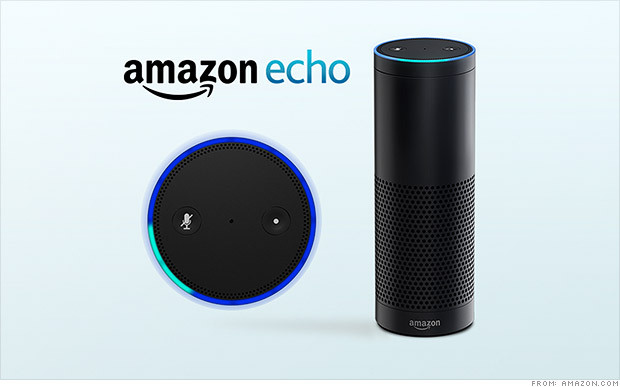 Things to ask your Amazon Echo

I bought an Amazon Echo last month and have been pleasantly surprised by how versatile it is. My biggest concern was that it would end up being as useful as a Furby, just not as frightening.

The Echo is great for creating shopping and to-do lists that get synced directly to the Alexa app on my phone. Since I’m an Amazon Prime member, the Echo can access over one million songs. I’ve also uploaded 200 or so of my own MP3s. Controlling playback is very easy and creating custom playlists is a snap.

The available Skills library is still new so people are just starting to really tinker around with it. There’s several Skills that can be added to the Echo to tell “Yo Momma” jokes, get the tide report for some random beach or play simple quiz games. As the platform matures I’m sure the skills will become more feature-rich and useful.

I’m integrating some home automation into it. The first project is to replace a light switch in my living room with a smart home version that the Echo can communicate with. After that I’ll be able to say “Alexa, turn on the living room light.” It’s much slower than flipping a switch for sure but not as cool.

Alexa has some snappy comebacks built in to it. Try some of these from the list below. Some were found online but most were the result of just talking to it.

Things to say to Alexa on your Amazon Echo

“Are you a lumberjack?”

“What is your quest?”

“Surely you can’t be serious.”

“I see dead people” (or any other random famous movie quote)

“Are you trying to seduce me?”

“Are we in the Matrix?” (ask several times)

“Do you think I am handsome?”

“Who let the dogs out?” (ask several times)

“Do you know Google Now?”

“Do you know GladOS?”

“What are the three laws of robotics?”

“Show me the money!”

“You want the truth?”

“All your base are belong to us.”

“What is the loneliest number?”

“What does the fox say?”

“Why did the chicken cross the road?”

“What is the meaning of life?”

“What is the airspeed of an unladen swallow?”

“What is your favorite color?”

“What is the answer to life, the universe and everything?”

I’ll update this list as I find out new things. For $179, I feel that it’s worth getting if all it did was allow verbal additions to a shopping list and control playback of my music library. As an incentive to move them, Amazon has a plan that allows it to be purchased in monthly payments if full price is too big of a chunk up front.

“Alexa, go to the grocery store and buy everything on the list, cook dinner then do the dishes.”

“I’m sorry, I don’t understand the question — plus stop being so lazy! Peel yourself out of that chair and get some exercise!”