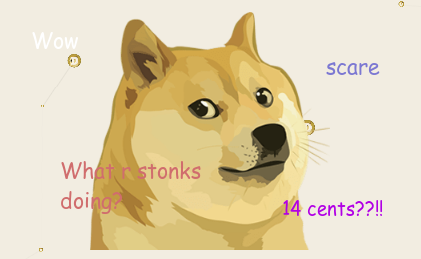 Doge Barking at the Moon

I can't believe Dogecoin is climbing like this. I bought in at $0.055 (5 1/2 cents) earlier this year and sat on it for a while. Then it jumped up to 47 cents this morning! Elon Musk said that it was a joke crypto but it doesn't seem like one right now.

Why is the price of Dogecoin jumping so high? Mainly due to this:

All it takes for Dogecoin to jump is Elon Musk to post a tweet with the word "doge" in it. Right after this tweet, it started it's meteoric rise to 0.47. It has stayed in the 0.30s ever since, gravitating toward the 0.40s again by 11am.

What does this mean? Well, if you bought Doge like I did at 0.055, it's now worth a considerable amount more.

I had accumulated 14,000 coins over the course of several months earlier this year when it was at 0.055

I think they underestimated the power of memes and Elon Musk's ability to Tweet. He has been silent since on Twitter this latest boom. I'm sure I'm not alone in hoping that he posts again soon but please wait until I snag some more coins!